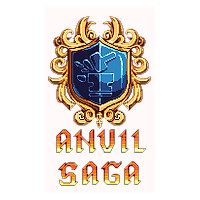 Anvil Saga is a sim game about running a medieval forge during the Hundred Years' War. The player has to complete orders, develop the business, construct new rooms and hire workers.