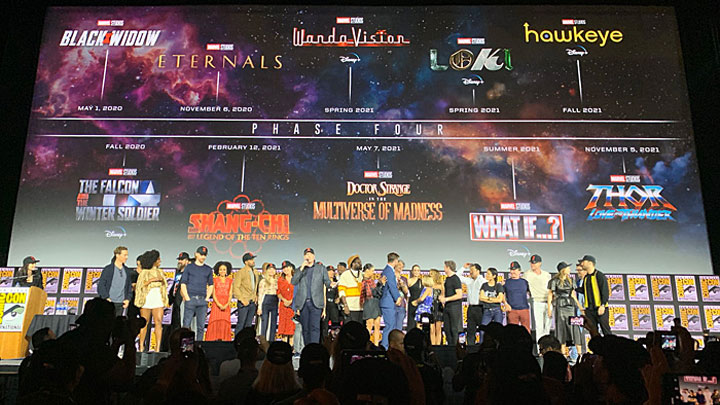 The following years are going to be very prosperous for Marvel fans. Source: Geek Girls.

With the premiere of Spider-Man: Far From Home, the third phase of Marvel cinematic universe has come to an end. At a Comic-Con panel, the plans for the future of the franchise were presented and they are extremely ambitious.

Marvel's next movie is Black Widow. The production will go to cinemas on May 1, next year. First trailer of the film was shown on Comic-Con (and it is unlikely to be released outside the panel). In it, fans could see, among other things, a combat sequence between the title character and her sister played by Florence Pugh.

The film is set shortly after the events of Captain America: Civil War. It has also been confirmed that Black Widow will face the Taskmaster.

Marvel's second film next year will be Eternals, which will be released on November 6. The production will star Angelinia Jolie, Richard Madden, Salma Hayek and Ma Dong-Seok.

In 2021 Shang-Chi and the Legend of the Ten Rings will open. The film will debut on February 12 and the title superhero will be played by Simu Liu. His opponent will be the Mandarin, played by Tony Leung Chiu-wai. The cast will also include Awkwafina.

Doctor Strange and the Multiverse of Madness - May 7, 2021

Marvel's second film in 2021 will be Doctor Strange and the Multiverse of Madness, which will be released on May 7. Director Scott Derrickson revealed that the project will be a horror. An important role in the plot is to be played by Scarlet Witch (Elizabeth Olsen).

Thor Love and Thunder will debut on November 5, 2021. The film will be directed by Taika Waititi (Thor: Ragnarok) and Natalie Porman will return as Jane Foster. This time, however, she will become Thor, although Chris Hemsworth will also be present in the production.

The film will be based on the comic series The Mighty Thor by Jason Aron. The Valkyrie, played by Tessa Thompson, will also play an important role in the plot.

The plans also include a new Blade, although this project does not have a release date yet. It is also not entirely clear whether it will be a movie or a TV show. It was revealed that the eponymous vampire hunter will be played by Mahershal Ali. After winning an Oscar for his role in Green Book, the actor arranged a meeting with producer Kavin Feige, Marvel's managing director of the universe, and asked him for the role.

It is worth noting that the choice of actor shows that Disney does not take Netflix's series too seriously. Mahershal Ali played Cottonmouth in Luke Cage's first season.

During the panel it we were also informed that Guardians of the Galaxy 3, Captain Marvel 2, Black Panther 2, Mutants and Fantastic Four were planned. However, no concrete details have been disclosed regarding these projects.

Marvel is also preparing a number of TV series that will be released on Disney's streaming service.

The Falcon and the Winter Solider - Autumn 2020

The Falcon and the Winter Solider will debut next autumn. The action will be set after the events of Avengers: Endgame. In addition to the title characters, the series will feature Zemo, known from Captain America: Civil War, with Daniel Bruhl reprising the role.

In the spring of 2021 the series WandaVision will be released in Disney+. The events of this production will be associated with the plot of Doctor Strange and the Multiverse of Madness.

In the series Scarlet Witch and Vision they will meet superhero Monica Rambeau played by Teyonah Parris.

In the spring of 2021, a series about Loki will also debut in Disney+. The only thing we know about it so far is that its action will be set after the events of Avengers: Endgame.

The Hawkeye series is also planned to be released on Disney+ in the fall of 2021. Considering that there are more than two years left before the premiere, it is not surprising that not many details about this production were given. The only thing we know is that archer Kate Bishop will play an important role in the story.

Disney's plans are not limited to live action projects. Comic-Con was also used to announce an animated series called What If...

The cartoon will present stories from alternative versions of Marvel's universe, and many actors known from Marvel's films will provide voice to the characters.