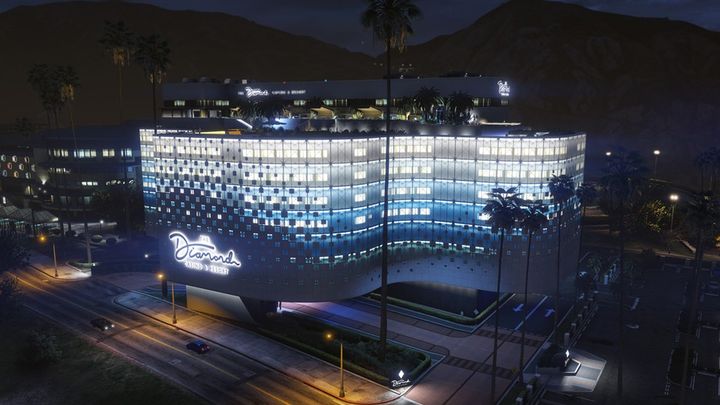 The casino is part of the cancelled GTA V story add-on.

Yesterday, Grand Theft Auto Online - the online mode of GTA V from Rockstar Games - received another major update. Wit its launch, Diamond Casino & Resort started operating in the virtual world. It is worth noting that the building itself has been in the game since 2013. Eurogamer editors report that it was part of one of the single player expansions that were cancelled due to the huge success of GTA Online.

The original source of information are the references in the game code found by GTA community members Tez2 and Yan2295. They suggest that we were supposed to receive three DLCs, codenamed "Trevor", "Dead" and "GTA". The first two were to focus on the fate of Trevor after the end of GTA V (he was to cooperate with the IAA - Internal Affairs Agency) and... a zombie apocalypse. The details of the third expansion are not known. It is worth noting that developers planned to approach the discussed DLCs with the ambition characteristic for Rockstar Games.

"What Rockstar was planning to do with the single-player DLC can be compared to adding a whole new map expansion. They had plans to redesign 80 or 90 per cent of the map to fit a specific theme - one of the episodes was supposed to feature a zombie apocalypse. Rockstar would make changes to the whole map to fit the zombie apocalypse theme," Tez2 told Eurogamer.

But why did it take so long to open a casino that was already in the game? This is due to legal problems - due to the presence of microtransactions in the game, it was feared that virtual gambling could go against to the laws existing in many countries. Only while working on the update to Red Dead Online was it possible to work out the right solution, which soon afterwards also found its way to GTA Online.

"In Red Dead Online's case, you use cash to gamble and you can purchase gold bars from microtransactions. The extra currency ensures there's a layer of safety for Rockstar from legal trouble, even though that doesn't apply to all regions or countries as some may have trouble with the existence of gambling itself - and not the way to acquire cash," said Tez2.