No one needs to be reminded how disappointed gamers were at the release of Cyberpunk 2077 - the game was full of bugs, imperfections and, as a result, even pulled from PlayStation Store. With these events in mind, CD Projekt's Chief Executive Officer Adam Kicinski intends to make improvements at the company, which he told Bloomberg.

The first of the changes is to hire more staff. This is necessary after the year-on-year growth of employment in 2020 decreased to 7%, most of the staff was forced to work from home, and in addition 10 developers left the company. All of this combined has resulted in a crunch to be able to release the game in 2020. With that in mind, Kicinski wants to increase the number of employees by 20% a year, which is the same as it was before the pandemic. 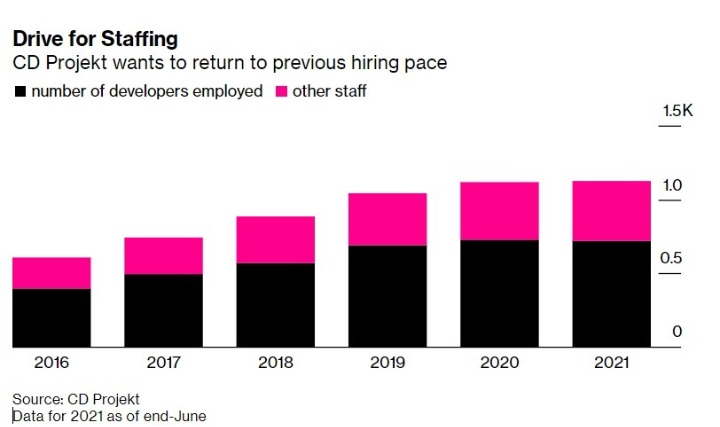 Apart from that the CEO has also decided to introduce the so-called "agile work method", which greatly facilitates the process of developing games. In short: this organization method involves dividing it into several smaller stages, which, depending on the task, can take from one to several weeks and are implemented one after another. Currently, about 100 employees are already using the method. What is more, yoga classes, canteen and even walks with dogs are available for the staff at CD Projekt HQ. The motivation to introduce these changes was Cyberpunk. As Kicinski says:

"The retrospection of the project that didnt go exactly as planned has triggered a strong motivation for change".

However, not everything is as colorful as it might seem. In order to hire more people, the company faces a problem in the form of people's reluctance to change workplace. This is caused, among others, by the necessity to move, which the future employees would have to face. While moving between cities within a country is not a big problem, in the case of employees from outside, it is a rather expensive undertaking. CD Projekt also has a branch in Canada, but Kicinski does not want to invest in another one, if only for the sake of additional profits. And although for now working in the company's headquarters is not obligatory, it may turn out to be a key condition in the future years.

Speaking of profits, it's important to mention how much of a disappointment Cyberpunk was. As a result, the head of CD Projekt does not want to promise too much when it comes the game's release on next-gen consoles, which is scheduled for the end of this year. As Kicinski says, he hopes that the reception of the title will gradually warm up, but he does not expect any "wow" effect, but simply regaining of the losses, which reached 62% of the company's value. 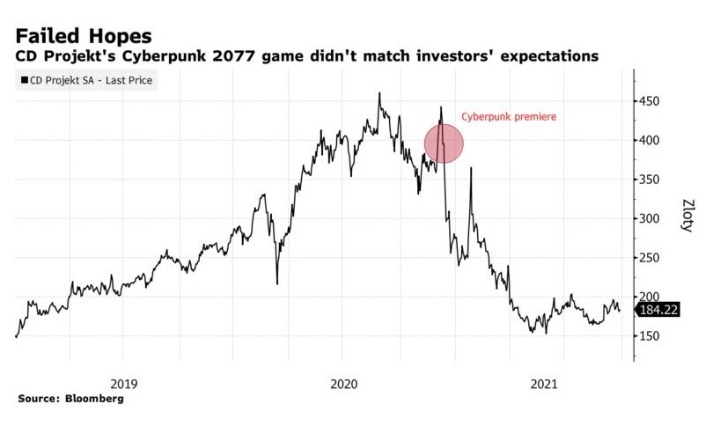 The value of CD Projekt's stock after the launch of Cyberpunk 2077. Source: Bloomberg.

Such a result was obviously influenced by the court cases which followed the release of Cyberpunk and which the company had to deal with. After all, there were rumors of class action suits, CD Projekt was inspected by the Office of Competition and Consumer Protection, and recently the British company Abri Advisors sent a letter demanding the resignation of Adam Kicinski and Marcin Iwinski, the company's president and vice-president respectively, from their posts.

Still, despite the controversy that surrounds the company after the unsuccessful launch, what matters is that the board is drawing conclusions from the failure (let's hope they're the right ones) and striving to improve the tarnished image.