Dying Light 2 is generating a lot of excitement. After all, it's one of the most anticipated game on Steam (and beyond). However, we've received almost no solid information for a long time, unless we're talking about the departure (or sacking) of the scriptwriters. A recent update regarding the development process didn't change much in this regard. In this context, it's not surprising that some players express concern (to avoid using stronger words) about the future of the project. Perhaps their concerns will be dispelled by an extensive interview with the creators of the second Dying Light posted by Wccftech.

A large part of the conversation was about the technology used by the creators, which is supposed to be a huge help in creating the world of Dying Light 2. C-Engine offers much more capabilities than Chrome Engine 6, even if we omit ray tracing support and better use of multi-core processors. This, along with other new tools, enables the developers to, among other things, place more objects and characters or zombies in locations, with both NPCs and the undead behaving much more realistically thanks to improved AI. All this without loading screens thanks to World Streaming technology. Add to this a system responsible for the branching storyline and how Dying Light 2's world is shaped by the player's actions.

Of course, all these novelties needed to be refined and mastered by the developers. Nevertheless, Lukasz Burdka (Techland's senior technology programmer) assures that this was taken care of already at the pre-production stage. Meanwhile, Tomasz Szalkowski (rendering director) revealed that the team started testing Dying Light 2 on PlayStation 4 and Xbox One very early on to ensure the best possible performance on those consoles. In the context of the game's huge world and the problems of another recent Polish hit on last gen, such assurances are to be welcomed with relief (and with a cautious hope that they are true).

It should be added that on the PS5 and XSX/S we get three graphic modes: 4K, performance (providing at least 60 FPS) and "quality" (i.e. with ray tracing enabled). For now, however, no details have been given.

A huge sandbox to fill

If you still remember the reports from 2019, the developers of Dying Light 2 promised a world four times larger than in the first installment. After the game was delayed indefinitely, some suggested that the game'scope had outgrown the developers' abilities. However, Burdka claims that it wasn't technical problems that prolonged the work on the project, but the sheer immensity of the world. After the mentioned necessity of mastering new technology, creating such a vast map wasn't a big challenge. For example, the CityBuilder tool significantly accelerated the filling of the map with realistic buildings, allowing the creators to make them by drawing city plans and easily modify them throughout the map. 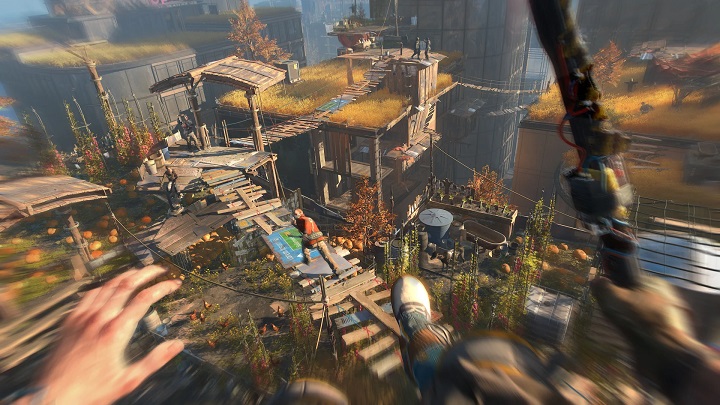 What's really taking the developers so long is filling Dying Light 2's world with meaningful content in terms of gameplay, exploration, and story. Apparently the developers don't care about beautiful, but essentially empty locations. Yes, the new technology enables Techland to spend more time on more "creative" activities, but with such a huge map, it must take a lot of time. Especially since - as Burdka emphasized - the world of Dying Light 2 is more "horizontal" than its predecessor, making the city seem even bigger.

As a result, Tymon Smekta;a (the game's main designer) assures that - just as announced - completing the main storyline of Dying Light 2 will take about 20 hours. To get to know the entire content we will need 2-3 times as much time (which is less than the over 100 hours promised earlier). The starting location alone should keep us busy for 7-8 hours, if we want to discover all its secrets. It should be noted that we'll also encounter, dynamic events like in Red Dead Redemption 2, but we don't know much about them yet. The devs have long refrained from introducing this concept to the game, as it took place "relatively recently," i.e. in the second half of 2020.

When do we get a gameplay?

If you were counting on details of the plot or gameplay, we have bad news. The creators did not want to mention much even about Aiden Caldwell, the main character of Dying Light 2, because it would involve revealing too much information about the story. All they revealed was that he'll be heading into the city in search of someone (or something), but subsequent encounters with the surviving residents of the metropolis will complicate his task. We also know that while we will encounter temporary companions in the game, there will be no team recruitment system. At least in the basic game, because Smektala would love to see such a solution added in a DLC.

The developers also did not reveal when we can expect a gameplay demonstration. Techland intends to reboot communication with the players "very, very soon", which will probably translate into more information about Dying Light 2. However, the developers stressed that they don't want to talk about the game too early, as they did on the occasion of its announcement. For now, fans must get by with the residual gameplay fragments released so far. Dying Light 2 is due out later this year.