It is possible that the growing concerns about the release of God of War: Ragnarok being delayed to 2023 will turn out to be unfounded. Rumors appearing in recent days about the upcoming game from Santa Monica Studio are contradicting themselves - on the one hand, we hear that there is a chance for debut in late 2022, and on the other that Kratos and his son will return only in 2023.

Jason Schreier - a popular industry journalist writing for Bloomberg.com - doubts the rumors of the alleged delay. Today, he made that clear in an article, in which he wrote that God of War: Ragnarok is scheduled for release in November 2022, citing three informants directly related to the development of the game in question.

In addition, two of them had assured Schreier that the exact release date of the title will be announced within a month. This may seem a bit surprising, especially since Sony did not raise the topic either at the last week's State of Play nor at yesterday's Summer Game Fest.

Nevertheless, Schreier's reportings were referenced by another well-known industry journalist, namely Tom Henderson. He believes that this information is consistent with the announcements made by Sony last week. Henderson was also tempted to speculate that another State of Play may be organized soon. But will it be so? We will find out soon. 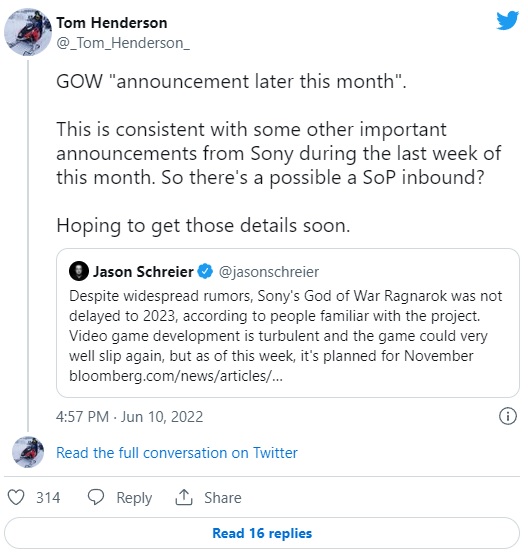 As a reminder, I'll add that God of War: Ragnarok is a direct sequel to the hit from 2018, which is heading to the PS4 and PS5 (although, following the example of its predecessor, it may also come to PC in some time). Due to the coronavirus pandemic, the work on this title has been somewhat stalled, and its release has been postponed several times - both officially and unofficially. Everything seems to indicate, however, that this is the final stretch and we will soon find out what fate awaits Kratos and Atreus.

The Invincible Will Reveal Its Secrets in Just a Few Days

The Invincible Will Reveal Its Secrets in Just a Few Days

We’re not going anywhere. Interview With Frogwares About Gamedev in Wartime Ukraine