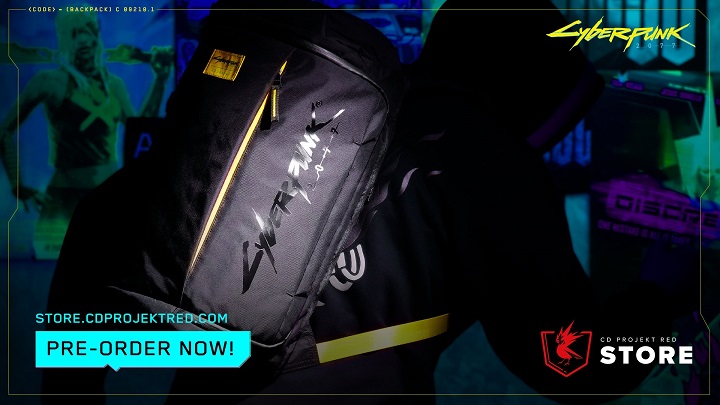 Will you be tempted by a cyberpunk backpack?

Unfortunately, there is still quite a lot of time left until the launch of Cyberpunk 2077. However, from time to time CD Projekt RED tries to make the waiting more enjoyable for the fans. Yesterday, thwe company announced that a Cyberpunk-themed backpack has just appeared on the market. It was created by Doughnut and you can buy it for $112 (plus shipping cost - $11) at this address.

Cyberpunk backpack is waterproof and its capacity is 20 litres. The bag has many pockets, including one that can fit a 15-inch laptop. The whole thing is made of Cordura 420D Nylon. You can see how the product looks like in its full glory on the images below and on the official website.

Fans of Cyberpunk 2077 can't complain about the lack of various gadgets related to the game. Recently we had a chance to see, among others, GeForce RTX 2080 Ti Cyberpunk 2077 Edition GPU, the main character's figure for almost $230 or Funko Pop toys.

Cyberpunk 2077 will make its launch on September 17, 2020 on PC, PlayStation 4 and Xbox One. It will also later appear on next gen consoles. A few days ago we learned that CD Projekt RED has submitted the gane to PEGI and ESRB for an age rating, which may mean it is almost finished.