February and March promise to be phenomenal for gamers - in the space of two months we'll see the release of such highly anticipated titles as Dying Light 2, Horizon: Forbidden West, Elden Ring, Elex 2 and Gran Turismo 7. As you surely know, two of them are Sony's exclusives: the sequel to Aloy's adventures (February 18) and the 7th full-fledged installment of the racing game series from Polyphony Digital (March 4). It so happens that last weekend we learned the probable sizes of these games - in both cases the volume is impressive.

Horizon is expected to require 96.35 GB in the United States and 85.91 GB in Europe - and that's without the so-called Day 1 patch. Why such a difference? So far we do not know. We also do not know the size of the Japanese version. What we do know is that the preload is to be possible a week before the release, i.e. from February 11.

When it comes to Gran Turismo 7, according to the description on PS Store - the game will occupy approximately 110 GB on our hard drives. That's quite a lot, especially considering that the previous game in the series, Gran Turismo Sport, "weighed in" at around 40GB at launch, and then got even bigger as more content was added. It remains to be seen how many GB the seventh game will end up weighing in at. 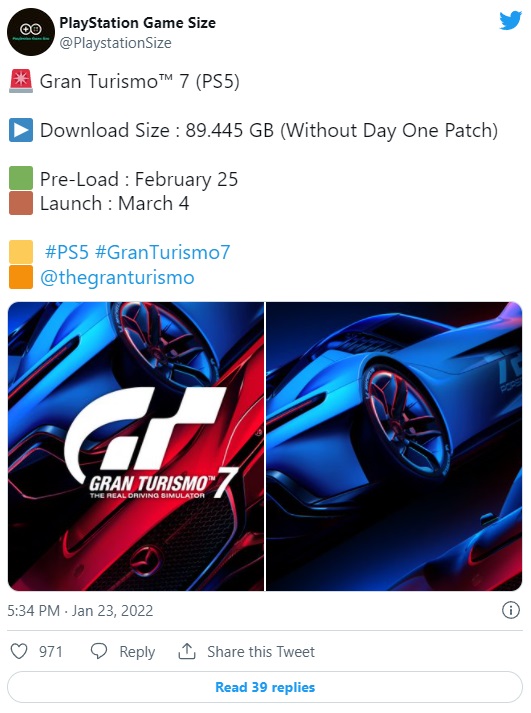 Getting the Day 1 patch alone will require downloading about 20.5 GB of data. Like with Horizon, the game's preload - 89.5GB of data - will thankfully be available a week before launch on February 25th. Those who pre-order the digital edition should therefore not be disadvantaged. Let me remind you that it will be slightly different from the physical edition. Details can be found here.

Cartels Recruit Smugglers in GTA Online and Other Games

Strike at Raven Software is Over