Safe Betting Sites has looked at the sales of game consoles over the years. The data shows that Nintendo wins the "console war".

Where did the data come from?

The data used to compile the summary comes from Safe Betting Sites and VGChartz. The latter is responsible for tracking sales of consoles and their software. It also provides tools to analyze data from around the world.

Since NES, Nintendo has sold 739.87 million units of gaming platforms. For comparison, Sony has sold 541.64 million units of all its consoles, and Xboxes has been selected "only" 158.92 million times. Why was Nintendo so spectacularly successful? As the website points out, the Japanese own some extremely popular franchises such as Mario, The Legend of Zelda or Pokemon, and exclusive titles are definitely a solid argument for buying their gaming hardware. What's more, Nintendo is always looking for novelties. While PlayStation 4 and Xbox One have taken advantage of the well-known 'home' formula, Switch has shone as a portable console with the ability to connect to a larger screen. 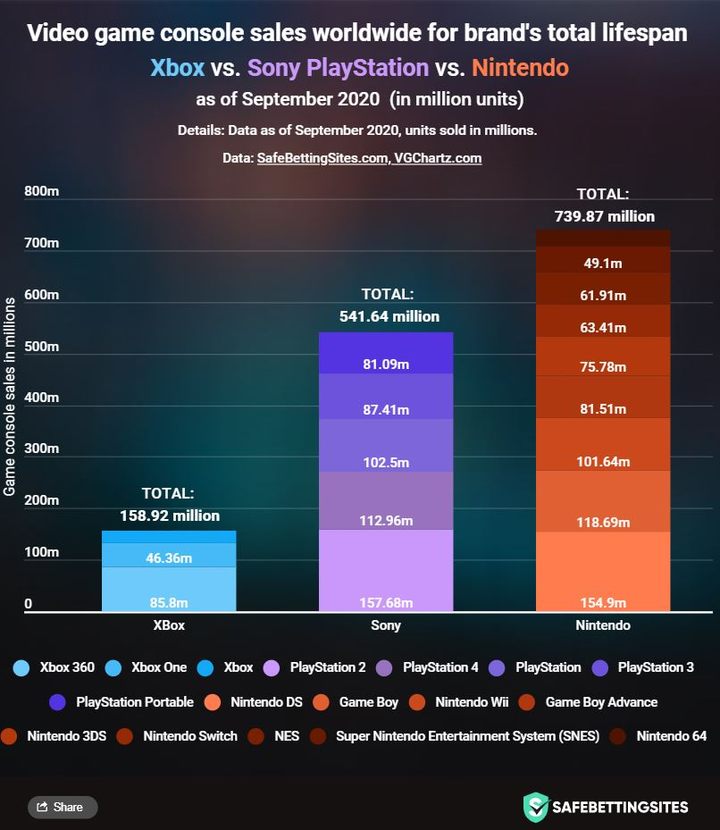 Although Nintendo's latest platform sold 63.41 million copies (almost half of PS4's result), it still outclassed the popularity of the eighth generation Xbox. Microsoft's console achieved a result of 46.36 million copies sold, and the brand itself took the infamous last place in this list. As the data shows, the company has to do a little more to match Sony and Nintendo. Do Xbox Series X/S and Game Pass have a chance to change something? Or maybe the recent acquisition of ZeniMax will improve Microsoft's situation?