Analysts from Ampere Analysis have compiled a report on the sales results of PlayStation 5 and Xbox Series X|S and compared them with the results achieved by their predecessors - PlayStation 4 and Xbox One - in the same period after their release (via Video Games Chronicle). 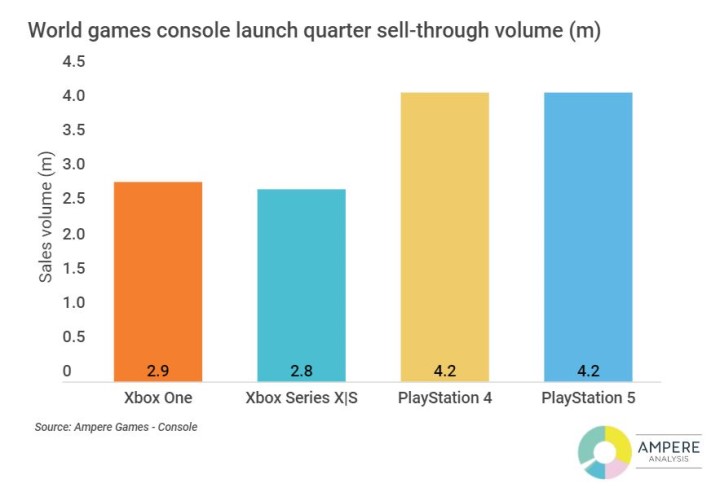 The number of consoles sold from launch to the end of 2013 for PS4 and XONE compared to 2020 for PS5 and XSX|S. Source: Ampere Analysis

Starting with Microsoft, 2.8 million XSX|S units were sold by the end of the year. That's 100,000 fewer units than the Xbox One sold in the same period. Let's also remember that its predecessor initially debuted in fewer global markets.

Microsoft will not rely solely on sales of its latest console. The company intends to continue to focus on profits from its Xbox Game Pass subscription and on building as large a player base as possible not only with their console, but also with PCs and smartphones. However, Ampere Analysis maintains that Series X|S Xbox owners will be the most important part of the US giant's business model, at least until 2025.

Sony also failed to break its own record. Analysts say the PlayStation 5 sold 4.2 million copies by the end of 2020. PS4 sold the same number of units in the first weeks after its release. However, it is worth noting that the PS4 was not available in the Japanese market at that time.

Sony equaled the achievement from over 7 years ago. However, it could have been much better

Last week, Sony provided a slightly different figure in its financial repory - 4.5 million devices shipped, but experts point out that their data relates only to consoles bought by the customers. Analysts predict that by the end of March 2021, Sony will have sold between 7.6 and as much as 8 million consoles. PS4 found 7.5 million buyers during the same period.

Ampere Analysis blames the current state of affairs on the COVID-19 pandemic, which caused problems in the production of components, which in turn affected the availability of both companies' consoles around the world. Not to forget scalpers hunting down new batches of hardware, especially those from Sony. According to the report, all this contributed to lower results compared to the previous generation.

Meanwhile, Nintendo, in contrast to the competition, broke its own record. Last year as many as 26.3 million Nintendo Switch units were sold. Until now, the best result belonged to the Nintendo Wii console, which sold 24.5 million copies in 2009.

The Medium and Observer: System Redux Will Get Boxed Editions

Assassin's Creed Valhalla Will be Supported Longer Than Odyssey

Will Laptops Share the Fate of PS5 and RTX 3000? Experts Predict Shortages