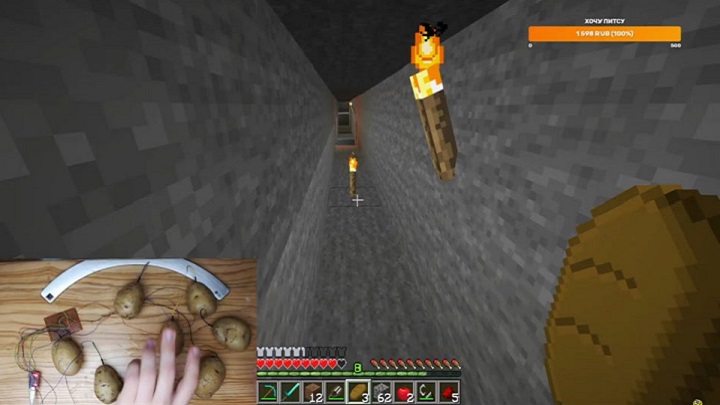 And what game would you play with potatoes?

As you might be well aware, many Minecraft players are very creative. Many times on our website we could see their amazing buildings or projects. However, the player, who yesterday took Reddit by storm (more than 12 thousand "ups" in the thread), showed creativity in a completely different field. During his stream, the user decided to play Minecraft using potatoes. So far, more than 95 thousand people have watched the gameplay, and 10 thousand of them liked the video (which you can watch below).

Because of the Russian language, it is difficult to understand how the potato controller works, but our editorial colleague managed to translate part of the streamer's speech. Thanks to this, we learned that the four potatoes on the right are actually a mouse. The extreme left potato is the arrow forward (just touch it to make the character go forward), and the one on the right from it is used for jumping. The potato at the top opens the equipment window. The Russian streamer admitted that it wasn't particularly difficult to make the potato controller, but at some points it was necessary to crack some tricky problems.