On Thursday, the Twitter profile @summergamefest - dedicated to the annual video game event hosted by popular presenter Geoff Keighley - published information that this year's show will take place on June 9 at 11 am PT. This will happen despite the absence of E3 2022, which this event usually preceded, so its rank will necessarily increase.

SGF 2022 will be broadcasted live on YouTube, Twitch, Twitter and Facebook. It's also possible to see the event on the big screen, specifically in IMAX cinemas - but only in the United States, Canada and the United Kingdom (if anyone is interested, tickets go on sale on May 12). 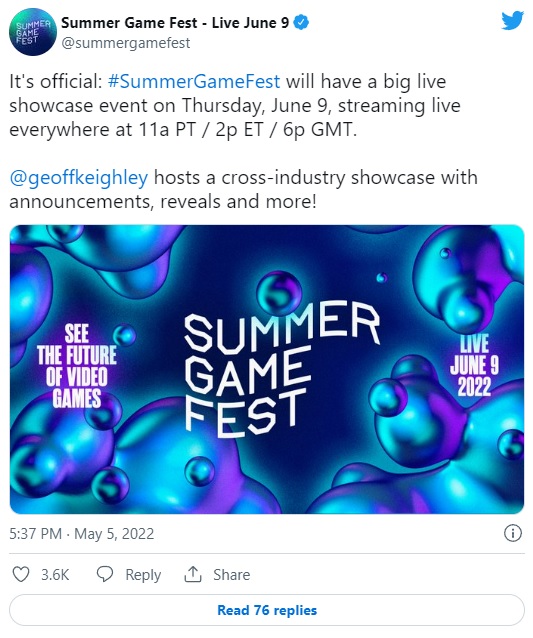 In addition, the lack of E3 - even with independent shows by Microsoft/Bethesda or Sony (especially the first one promises to be great; take a look at the possible list of games) - may lead to SGF 2022 showing more big productions than in previous years. And let me remind you that the previous edition of the event was crowned with presentation of Elden Ring. So what titles can we expect this time around?

Assuming that Microsoft and Sony will want to keep things under wraps and retain hits like Starfield, The Elder Scrolls VI or God of War Ragnarok for their own presentations, the pool of big fish in the gaming pond will drop significantly. Although... who knows?

The Witcher 4 is not likely to appear either - it's a bit too early. Nevertheless, it seems that you can still count on Vampire: The Masquerade - Bloodlines 2 or Gotham Knights, about which we already wrote about today. There should also be smaller productions and DLCs - an expansion to Elden Ring is definitely something I'd like to know is coming.

THE GAME AWARDS 2022 IN DECEMBER

For now Elden Ring is one of the main candidates for the title of the game of the year. It has been confirmed that the industry's Oscars - or The Game Awards 2022 gala - will traditionally take place in December. Like SGF 2022, the event will be broadcast in IMAX theaters, but again - only in the United States, Canada and the United Kingdom.

And considering that Geoff Keighley is good friends with Hideo Kojima, I wouldn't be surprised if some sort of short teaser of a game the Japanese developer is currently working on was shown at Summer Game Fest 2022. It's been over two and a half years since the release of Death Stranding, and in the meantime there have been rumors of a sequel.

And what games would you guys like to see at SGF 2022? Let us know in the comments.

Looking Forward to Hogwarts Legacy? Warm Up With This Elden Ring Mod

The Lord of the Rings: Heroes of Middle-earth is EA's New F2P Game

WoW Community Wants Thrall Back; What Happened to Him?