Sony continues its expansion on PC. The next PlayStation 4 exclusive that will live to see a PC version will be Uncharted 4: A Thief's End, the fourth installment of the excellent series of action games by Naughty Dog.

The port's reveal took place without fanfare. In the company's latest presentation describing the condition of the games and services division, on page 26, the company discussed the prospects for the projects of Sony's in-house devteams. It was mentioned there that Uncharted 4: Thief's End is among the planned PC ports. Unfortunately, it was not given when we can expect the release. 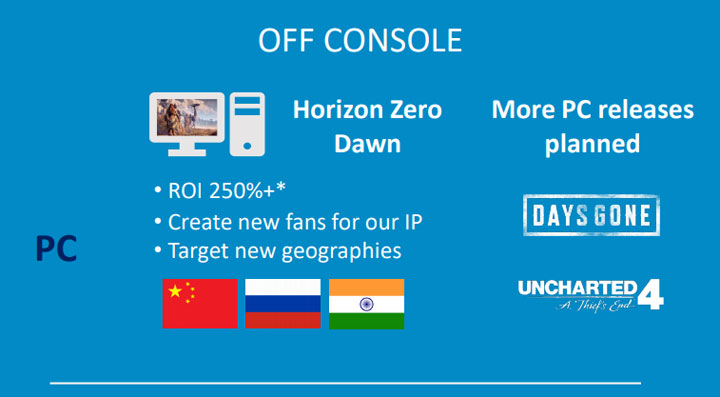 A mention of Uncharted 4 on PC appears on page 26 of the document.

As it seems, either the report's creators may have been a little hasty in revealing this information, or the marketing department may have been late in announcing the port. In any case, we expect the PC release of the game to be presented soon with an envelope appropriate to the game's importance.

Recall that porting PS4 exclusives to PC began Death Stranding. In the case of this game, however, Sony was only the publisher, so some people considered it an exception to the rule. Then, however, the Japanese company ported Horizon: Zero Dawn and Days Gone to PC, games developed by its internal teams. In the case of these games, Sony is also the publisher of the PC edition.

The aforementione ports turned out to be big successes. Horizon: Zero Dawn sells very well and Sony's report states that the investment in the development of the PC version has already brought a return of more than 250%. On the other hand, the PC version of Days Gone debuted a few days ago, on May 18, and was the biggest Steam bestseller in the week of its release.

Finally, it's worth mentioning that Sony's report also included another interesting piece of information. We learned that by the end of March this year, 7.8 million copies of PlayStation 5 were sold. The corporation's services are reported to be used by 109 million people per month.

Starfield at the Xbox Showcase? Microsoft Confirms Presentation With Bethesda