Recently, World of Warcraft fans have been finding a lot to complain about, both in the game itself and its developers. Recently, their target was Mike Ybarra, one of the heads of Blizzard Entertainment, who openly admitted to "raid boosting". In fact, he announced the broadcast of the heroic version of the Sanctum of Dominion raid as part of the so-called "sales run".

The term "raid boosting" refers to a kind of service provided by guilds in MMORPGs. Experienced veterans allow beginners (or less skilled players) to join advanced raids. It's not for free - those willing to join must pay a certain amount of gold (hence the colloquial term for this type of expedition as a "sales run").

In theory, this practice is not against WoW's regulations as long as the fee is not paid in real money. The problem is that since the time of Warlords of Draenor players have been able to purchase tokens that can be exchanged for gold in the game, thus circumventing the limitation. In practice, this means that the real currency can be used to get better equipment or cosmetic items that would otherwise remain out of reach for less hardcore players. In this case, Denial of Service - Ybarra's guild - values a full heroic-level playthrough of Sanctum of Dominion at 300,000 gold pieces, which at the current WoW Token rate translates to about $40. 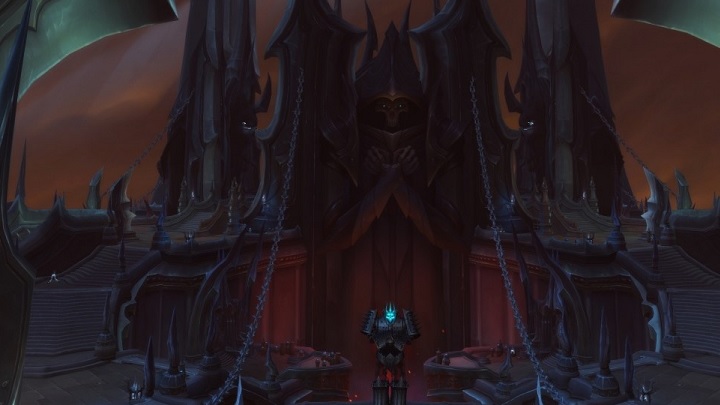 A guided tour of the Sanctum of Dominion is a pretty expensive trip.

Translating raid boosting into, as some want, an unfair advantage for money, i.e. the hated pay-to-win, is the main reason why some players scowl at this practice. The ability to pay an experienced "babysitter" to de facto complete a challenging raid for rookies creates resentment among those who aquired their gear and achievements on their own.

There are some side effects to this. As you can easily guess, guilds advertise raid boosting in in-game chats. As a result, it's sometimes hard to find someone willing to go for "real" raiding, as this type of information gets drowned out in a sea of ads from veterans offering their services. For these reasons, the fact that the head of Blizzard not only engages in but even advertises this practice, gave some people another reason to attack the creators of World of Warcraft.

However, many indicate that in this case, the complaints are somewhat unfounded. First of all, raid boosting is nothing new. This practice is almost as old as MMO games, and in World of Warcraft this type of service is offered by a large number of guilds. Mike Ybarra's guild does exactly the same thing as every more or less prestigious group of players in WoW.

Secondly, for these organizations it is not a matter of mindless greed. You have to remember that even for many experienced guilds, Mythic (or even Heroic) level raids are rarely routine. These escapades often require weeks of preparation, but - most importantly - also considerable expenses on necessary items (for example, potions). Gold from raid boosting enables veterans to save time (or money) that would otherwise be spent on long, arduous farming. Provided that the service itself does not cost them too much (read: they do not consume too many resources during the "job").

...and WoW players with ambitions

Speaking of which... thirdly - as described by KiriyamaSTRIX on Reddit - people who pay for raid boosting are often players interested in high level raids. This, of course, requires joining guilds, which in turn pay attention not only to the player's achievements (for example, through the Warcraft Logs page), but also gear. And you won't get it without spending long (really long) hours on the game.

Raid boosting enables you to save that time and focus on your personal development, i.e. increasing your raid effectiveness to improve your combat stats. This gives you a chance to join a better guild, which can be repeated until you are accepted by a group with the same goals.

As you can see, some players have nothing (or at least not too much) against this type of service. Most importantly, however, according to many World of Warcraft has far more serious problems than players wanting to save their time for actual gameplay instead of farming. Even if one agrees on the supposed harmfulness of this practice.