Star Wars Jedi: Fallen Order is a triumphant return of Star Wars video games to the Light Side of the Force – no microtransactions, enough content to play for over a dozen hours without being bored, well-balanced difficulty level, and the great atmosphere that unexpectedly exploded when visiting planet Ilum – at least in my opinion. 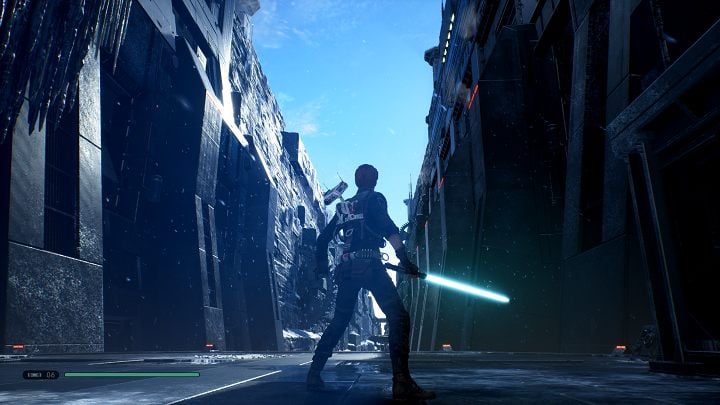 You reach this location at the direst moment of your adventure – the Empire closes in on your crew and you have lost your lightsaber. Thus you decide to go to Ilum – the sacred place to the Jedi – find a kyber crystal and create your own lightsaber. You explore the caves without a sword for half an hour or so which makes you feel vulnerable. After you finally find the crystal and a place to build your new weapon you feel relieved and… surprised – next to the colors available before (green and blue) you get to choose other blades – orange, purple, and turquoise resembling the one Ben Kenobi had at the beginning of the A New Hope.

When equipped with a new lightsaber and filled with optimism you leave the ice caves, you notice the Empire has thrown a lot of its forces at you. However, since you have your blade with you there is nothing – including Stormtroopers, battle droids, and even AT-STs – that you can’t face. Fantastic music written by Gordy Haab and Stephen Barton and the perfectly designed location shine more than ever together with the combat sequence – each Star Wars fan is bound to fall in love with this combination.