Bosses in Sekiro: Shadows Die Twice are mostly swordmasters impressive in terms of their skill rather than appearance. The Guardian Ape is an exception to this rule and, even though is not as intimidating as The Cleric Beast from Bloodborne or Sif from Dark Souls, the perspective of fighting him in close range (the game developed by From Software does not allow you to fight in another way) is really terrifying. 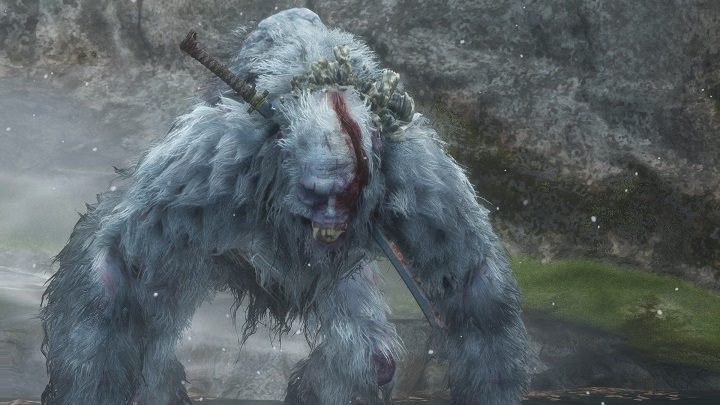 Super aggressive in the first phase of the battle, and unnaturally unpredictable in the second, the Guardian Ape is one of the most representative bosses in Sekiro.

And not without a reason. The monster roaming the Flooded Valley is not the most powerful boss of the game, however, fighting it is a torture. Mainly because you have thus far encountered enemies equipped with katanas and spears that were more predictable in their moves and easier to parry. The Guardian Ape has never heard of anything like elegant fencing, so he first rushes at you, beats you with its paws, grabs you in half and throws feces at you. Initially, it is difficult to imagine that Wolfs Sword is capable of dealing any damage to this monster. Finally, one is able to defeat the Guardian Ape and chop his head off with the gigantic blade, which throughout the entire battle has been stuck in his neck.

A few seconds of rest and the defeated corpse begins to tremble, one hand reaches for the sword, while the other puts the severed head back onto the monsters bloodstained neck And the next phase of the battle begins. Seriously, the first time I saw the Guardian Ape standing up again, I wanted to throw my katana at him and run. This is an excruciatingly challenging battle  mostly because of the drastic differences between the two stages  but they also give you a glimpse at the curse that the immortality is in the Sekiro universe.