The battleground under the aqueduct in A Plague Tale: Innocence

The first minutes of A Plague Tale: Innocence makes it clear that even though the main characters are children, the images shown throughout their adventure will traumatize any younger player. This statement cannot be stronger than in the fifth chapter of the story of de Rune siblings. This moment is even more shocking, as we are not prepared for it. The entire sequence starts idyllically: Hugo is chasing frogs, Amicia and her newly-made acquaintance Lucas are following in the back… Only the increasing presence of stench heralds the horror players are about to witness. 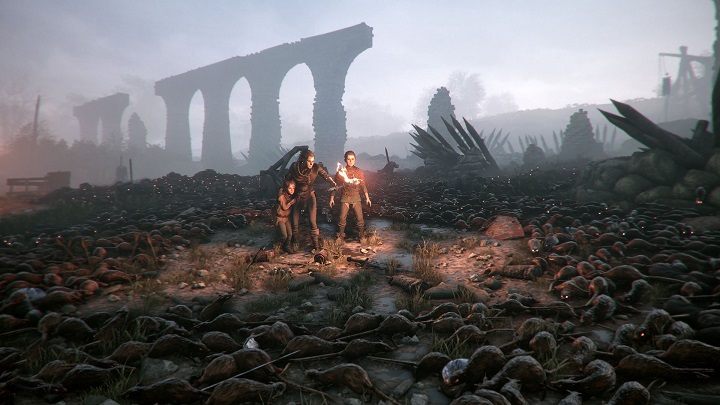 People with musophobia should forget about playing A Plague Tale: Innocence.

After reaching the aqueduct, players will see the battleground. Tens of soldiers’ corpses that were killed in an attack of the Englishmen are covering the ground, while the fog spreads across the entire place, making it even grimmer. Moreover, a flock of crows has already begun feasting on the corpses. Getting through the area filled with corpses with a child you are taking care of alone would be hard enough. The real nightmare begins when hundreds of rats emerge from underneath the dead.

Crossing the battleground is not only scary but also potentially lethal – hordes of rodents can kill Amicia if she gets out of the light. Players need to think on their feet and make their way through the hungry animals by lighting torches and opening new passages. The environmental riddles require players to perform some really ruthless deeds – throwing hanging corpses off the trees to distract the rats or sacrificing soldiers that are patrolling the area. This moment evokes authentic emotions and ties you in knots – and it probably is the only one from this list we are not keen to repeat any time soon.