The Ashtray Maze in Control

In case of really good video games, it is usually difficult to pick just one good moment. However in the game developed by Remedy Entertainment the situation is slightly different – in Control, there still are a lot of exciting moments, however the Ashtray Maze sequence is so spectacular that it leaves each and every other moment far behind.

The song “Control” that accompanies players when crossing the Ashtray Maze should sound familiar to the fans of Remedy Entertainment’s earlier works. The song is performed by Old Gods of Asgard – the virtual alter ego of a rock band called Poets of the Fall that has good relations with the Finnish developers. Their cooperation started back in 2003 when the musicians recorded “Late Goodbye” for Max Payne 2. Later on, they recorded five songs for Alan Wake. The artists appear also appear in the TV show that the main protagonist can watch.

This several-minutes-long stage is a fair of playing with the designed location. Ever since you enter the maze certain walls begin to open or close, the rooms grow to become several dozen stories tall, while pieces of the floor move around. Doors and hidden passages appear everywhere, rooms are flipped upside-down and multiple enemies are rushing towards the main protagonist. So apart from retaining good orientation around the ever-evolving area, one also has to shoot precisely and throw objects using telekinesis. 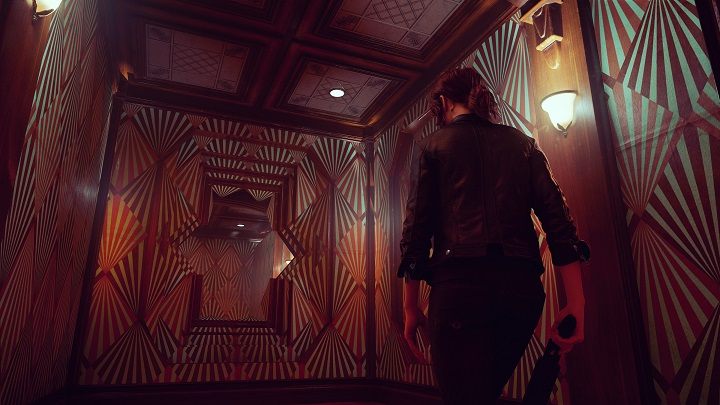 You reach the Ashtray Maze after over a dozen hours at the Federal Bureau of Control thinking that there is nothing else that might surprise you.

This sequence also stands out thanks to its atmosphere. Instead of office decor, you are taken to rooms with hypnotizing tapestry and bright red carpets. Also, the Walkman you borrowed from an intriguing janitor plays rock music with vivid vocals and juicy guitar solos. Even though calling this stage “a maze” is a huge overstatement – apart from complicated visual effects it is quite linear – it is difficult not to appreciate this presentation of imagination, vision, and atmosphere that perfectly fit into this weird (in a good way!) game.