The developers from Infinity Ward warned they would hold nothing back in their newest game in order to show modern combat in the most realistic way. Even before its premiere, Modern Warfare was controversial among journalists who claimed that showing crimes on civilians is too much for a medium meant for entertainment. The developers stuck to their decision, and players now can see for themselves in the second mission of the campaign that this is not a pleasant Yankee tale. 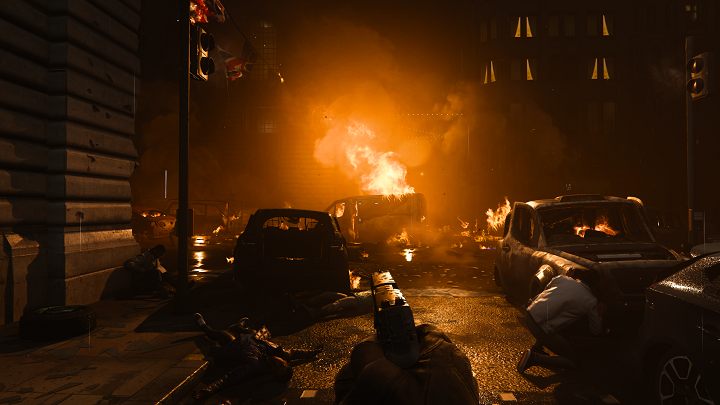 Players witness Piccadilly Circus being transformed into a warzone.

The chapter begins in a car from which you try to spot the terrorists planning an attack on Piccadilly Circus. You are able to locate a suspicious-looking van, however, when you try to stop it, the driver detonates it in the middle of the street. Since then, all hell breaks loose. One of your companions gets hit, car wrecks are burning all around, the civilians are screaming in panic, and you are in the center of it all forced to neutralize the threat.

Even though the Modern Warfare single-player campaign was well-received among players, it begot controversies in Russia – even though Russians might have already gotten used to being portrayed as villains, Infinity Ward might have gone a bit too far this time by making them responsible for authentic war crimes against civilians. The plot of the game features the massacre in Al-Hadisa and the bombardment of the so-called Highway of Death, and the Russian army is attributed with the responsibility for both of them. The problem is the fact that both situations happened in real life and it was the Americans who actually were responsible.

The problem lies in the fact that until they draw their weapons they do not differ from scared civilians. The player thus faces a dilemma: shoot first and hope to hit the right targets or to give the advantage to the opponent, which on the higher difficulty levels might be a suicide. It is also difficult to tell whether a person running towards you is a panicking civilian or a suicide bomber. The situation becomes more chaotic with card driving into each other, surrounding flames and smoke, as well as gunshots. Modern Warfare is fast to show that it will not hold back with traumatic scenes. It’s a shame that since that moment there are really few equally emotional scenes appear.