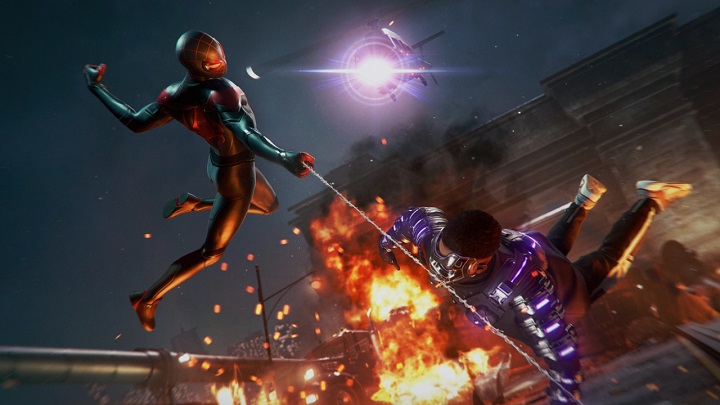 PlayStation 5 buyers should not complain about boredom.

The PlayStation 5 Showcase is over, and with it, presentations of numerous titles. We also learned when and for what price Sony's new consolewill be available, and which games it will offer on the day of its launch, November 12. The list of launch titles (although not necessarily exclusive) is included below.

As some publishers have still not confirmed the release dates of their games, the text will be updated as more information about the launch titles becomes available.

Remake of the game that de facto initiated the soulslike genre will take us to Boletaria, where we will face demons, beasts and other threats lurking in the foggy kingdom. Yesterday we had a chance to see the first gameplay from the production, and although the video made a little bit of a fuss with Sony's mistake, at the same time it showed that the Bluepoint Games team took the task seriously. New graphics, refreshed music and - in accordance with the convention of From Software games - plenty of opportunities to die unceremoniously at the hands of enemies - all this will be received with the release of Demon's Souls.

A new installment of Call of Duty: Black Ops subseries also appeared on PlayStation 5 Showcase. The video shows a mission in Turkey, where the Cold War was apparently much hotter than in the West. As a reminder, the game tells a whole new story, and although we'll find characters from the previous parts of the series, we won't need to be familiar with them to enjoy Call of Duty: Black Ops - Cold War. Additionally, alpha tests of the online mode have been announce, which will start tomorrow on PlayStation 4 and continue until the end of the weekend.

The players waiting for the "looter slasher" from Counterplay Game did not complain about lack of materials before Sony's presentation. Perhaps that's why the title didn't receive a new trailer on the PlayStation 5 Showcase. However, the creators revealed Godfall's release date, set for November 12 (the date of PS5's US release). That's when we'll be exploring the world on the brink of extinction to face the mad god Macross as one of the last members of an order of knights. As the genre name used by the developer suggests, the tour offers such sophisticated attractions as plenty of chopping of opponents and collecting a variety of equipment to adapt the style of play to our preferences.

One of the first games shown in the presentation was Spider-Man: Miles Morales, a sequel of the action adventure gamestarring the alter ego of Peter Parker. A video from PlayStation 5 Showcase showed us how the title character is doing as the new Spider-Man. The title will offer a whole new story set in New York City and the gameplay known from its predecessor, who captivated reviewers in 2018. We will check it all in 2 months.

The Nordic installment of the steakth game series (at least by name) will make its debut slightly earlier on PC, Xbox One and Xbox Series consoles. However, after the launch of PlayStation 5, there will be nothing to prevent the owners of this device from enjoying the Ubisoft's new production. The only thing we don't know is when the game will receive a free update that will add next-generation support for Sony's new console.

The game did not appear at yesterday's show, but - let's be honest - even without that there is no shortage of reports about the game. We have known for a long time that Cyberpunk 2077 will be available on ninth generation consoles on the day of its release. However, it's worth recalling that the work of CD Projekt RED won't immediately exploit the full power of PlayStation 5 and Xbox Series X. The game will receive a dedicated update for these platforms, but we'll wait until next year for a truly next-gen experience.

In accordance with the tradition of the Devil May Cry series, the fifth instalment of the series will be released in a special edition. It will make its debut on PlayStation 5 and Xbox Series X, and will be accompanied by new content (via the official PlayStation blog). This will include Turbo mode for gamers looking for faster gameplay, a new level of difficulty for those looking for a challenge, and - and this available for all fans - the ability to control an old friend from previous games. DMC 5: Special Edition will also use the benefits of ninth generation consoles, including the ability to play in 60 fps at 1080p resolution.

One of the most popular games on the market couldn't miss PlayStation 5. We've known about it for months, and yesterday's show didn't surprise anyone either. Another thing is that gameplay presents Fortnite on Unreal Engine 4, despite the promised switch to Epic Games' fifth generation engine. However, this will only happen after the launch of the technology next year.

The spin-off to the Little Big Planet series, of which we learned in June, is another title that we will check on the console's launch. The gameplay will not differ from the pattern known from the previous installments of the series. So get ready for lots of platform jumping with the charming hero, either alone or with up to three friends.

Let's stay on the subject of platformer games to mention Astro's Playroom, a continuation of the hit from PlayStation VR, announced in June. In this case, it will literally be a 'launch' title - the game will be found on the hard drive of every single unit of PlayStation 5, so we can begin the adventure with the title character as soon as we buy the console. We won't need VR goggles to do this - all we need is the DualSense controller.

A futuristic action game focusing on cars and ruthless demolition in the vein of Destruction Derby. Here, it won't be the position at the finish line that matters (in any case less than in typical racing games), but how many rivals we eliminate from the competition and how we do it.

J.K. Rowling is Not Involved in Hogwarts Legacy