Much has been written about the highly anticipated Caves & Cliffs update for Minecraft in recent months. It was announced in October, last year and is the biggest expansion for the hit game in years. It introduces so many new features that the developers were forced to split it into two separate parts. As scheduled, the first of them launched today. Update number 1.17 is available for both Minecraft Bedrock (PS4, Xbox One, PS5, Xbox Series X|S, Nintendo Switch, iOS, Android, Windows 10) and Java version (Windows, macOS, Linux).

First part of the Caves & Cliffs update introduces a total of 91 new block types to the game, among which amethysts and copper come to the fore. From the latter, we can construct, among other things, lightning rods. What's interesting, just like in nature, copper in Minecraft will slowly change its color under the influence of weather conditions. We can't forget about the new blocks of snow power, which you'll find yourself falling into, as well as the large leaves on spring-loaded stems that can act as climbing platforms. A spotting scope will also prove to be an extremely useful tool.

Thanks to Caves & Cliffs we will also encounter new mobs. On mountain peaks we'll come across goats, able to jump from block to block. If we have enough patience, we can try to breed them, which will provide us with another source of milk. The devs note that the rare screaming goats, which can be heard from far away, hide a secret and can prove to be extremely useful. 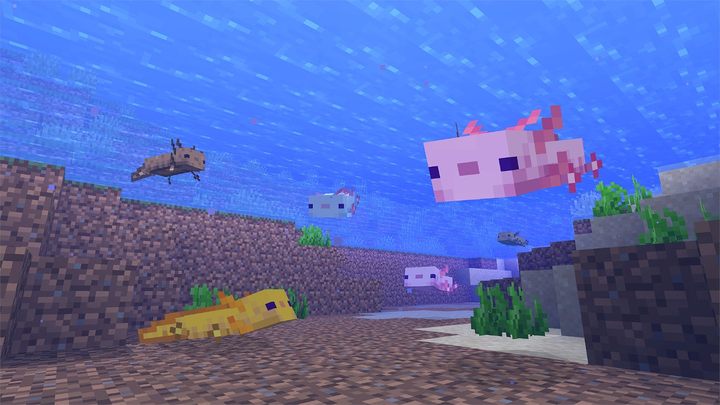 In underground lakes and open waters, we can now encounter squid that shine in the darkness and axolotls. These colourful salamanders-like creatures come in several variations, and can fake their death when their life points drop to a dangerous level. In addition, if we kill an enemy that is attacking us or an enemy that is being attacked by them, they will return the favor by removing fatigue effects and giving us temporary health regeneration. Tropical fish are a delicacy for these pets.

Second part of the Caves & Cliffs update, featuring new underground biomes and a new cave generation model, will appear around ther Holidays. The team from Mojang wants to thoroughly test all systems associated with the innovations. Next year, fans of Minecraft will be able to look forward to more updates, including a new archaeology system.

Gwent Price of Power: Once Upon A Pyre Expansion Launches