Creative Assembly continues the promotional campaign, probably aiming at preparing the players for the official announcement of the third installment of the Total War: Warhammer series.

The day before yesterday the first teaser appeared, which showed the star sign called the Grungni's Baldric (sign of Martial Pursuits). The next two showed three more constellations. A video called Heed the Heavens showed The Piper (sign of the Trickster), and yesterday in an animation called Sigmar protect us all... viewers could see The Drummer (sign of Excess and Hedonism) and Rhya's Cauldron (sign of Mercy, Death, and Creation). All four constellations are associated in turn with the four most important Chaos gods, Khorne, Tzeentch, Slaanesh and Nurgle. There is a high probability that we will see all four in the latest installment of Total War: Warhammer.

As if that wasn't enough, on the official subreddit dedicated to the Total War series, one of the users shared an image that shows Bloodthirster (one of Khorne's most dangerous demons) fighting against Kislev troops. The artwork has been called an alleged leak from the third installment of Total War: Warhammer. Comments point to its extraordinary quality or character models that are almost identical to those of the latest editions of the original Warhammer Fantasy developed by Games Workshop. In addition, some suggest that the leak may be a deliberate act by Creative Assembly to further promote the upcoming game. 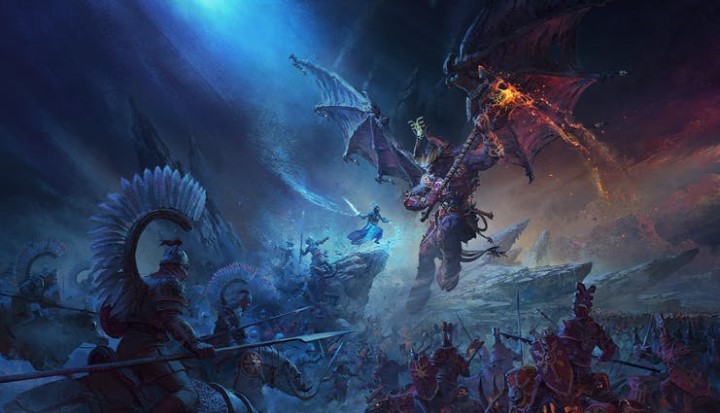 The alleged leak, which depicts a battle between a Daemon of Chaos and the army of Kislev. Source: Reddit

All this information is unconfirmed and remains a speculation. Will it turn out to be true? The only thing left for us to do is to heed the Heavens. Total War: Warhammer III is expected to be the final installment of the war strategy game series set in the Warhammer Fantasy world and the culmination of the trilogy started in 2016.