A month ago there were reports of an alleged account migration in PC edition of Minecraft. Today, Mojang confirmed that owners of Minecraft: Java Edition will have to migrate to Microsoft's platform. The situation was explained in an entry on the game's official website, but the creators also published a video with Nathan "Dinnerbone" Adams, which addressed potential concerns of the community.

The cancelation of Mojang accounts is to ensure greater security. With the move to Microsoft's platform, we will receive, among others, a two-stage login verification system, additional parental control options and the ability to block chat and invitations. In addition, players will have all PC editions of the Minecraft series in one place. Existing users will also receive a gift after successful migration in the form of a special cape.

The creators are aware that the change may raise concern of some players - just take a look at the video. That is why Mojang has tried to dispel any doubts about the planned migration. The switch to Microsoft accounts will have no impact on the content of Minecraft: Java Edition. Players will still be able to create their own skins and mods as before. The ability to play with friends regardless of the PC version we have, including PvP games, will remain unchanged. It is also noted that Microsoft's account will be required to play. New players will be setting them up automatically at the end of the year, although no exact date was given. However, the migration of existing users will begin in early 2021. For more details on the migration, see here. 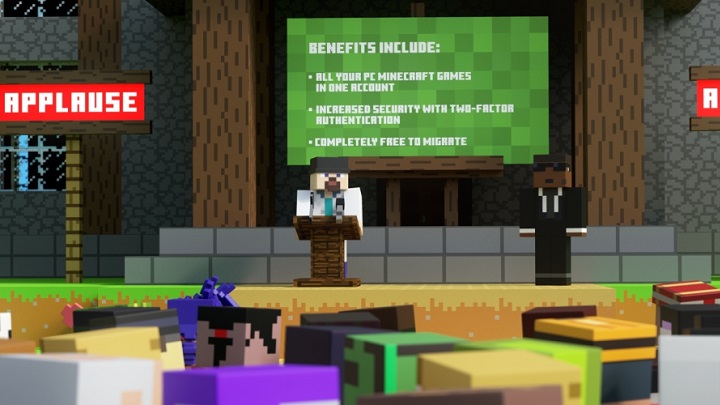 The Minecraft community is not thrilled with the planned move.

Despite Mojang's efforts, not everyone is convinced by the arguments for migration (see Reddit). Some seem to have an aversion for Microsoft, but there are also more justified concerns. Some players point to the problem of blocking access to the services of the Redmond giant due to false user reports, even when we only play solo. Others point out that people using several Minecraft accounts (for example, machinima developers) will have to create a separate profile for each of them.

Ghostrunner on PS5 and Xbox Series X in 2021

Giger Would be Proud; 14 Minutes With Scorn