Laws of War is the next big expansion pack for Bohemia Interactive's military sandbox Arma III. The add-on will let the player become a minesweeper, member of a humanitarian faction.

Whether Elex is going to be successful, we do not know. We do know, however, that Piranha Bytes is already making serious plans for Elex 2.

Finally, the day has come when fans can learn how the story of Gordon Freeman and Alyx Vance would have ended in Half-Life 2: Episode 3, if that game ever came out. The question is: are you ready for this?

Scythe, a board game set in the 1920+ universe, is coming to Steam

Iron Harvest is not the only game set in the unique 1920+ universe. Another one is Scythe, a successul board game, which is also coming to Steam.

Tyranny: Bastard's Wound is the first story-based expansion for Obsidian Entertainment's last year's RPG. Fans will get to play it in two week's time.

Fans of Second Life should now give Sansar VR a shot

Creators of Second Life are taking another step into the future of life simulation with Sansar, an elaborate platform for social VR experience.

The Witcher trilogy is getting a limited re-edition

Hardcore fans of The Witcher franchise will soon get a chance to expand their collection with some neat, limited editions of the three games... provided they live in Poland. 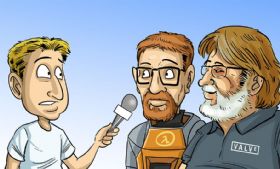 The only person that knows something about Half-Life 3 is HIM.

Are you impatiently waiting for the next incarnation in the successful classic RPG series Divinity? If so, you will devour this handful of new details about Divinity: Original Sin II, straight from Larian Studios.

Rainbow Six: Siege to get a 42 GB patch

The next update for Rainbow Six: Siege is going to be a big one. While varying in size across platforms, the Ultra HD version of the patch will weigh 42 GB on PC.

Assassin's Creed Origins will let players explore ancient Egyptian tombs, recreated as closely as possible based on historical references. Like it was in early Assassin's Creed games, those will be filled with puzzles and navigation challenges.

Call of Duty: WWII multiplayer footage and new details on the story campaign

Call of Duty: WWII single player campaign will feature an infiltration mission, in which you will have to disguise yourself as a German soldier. See what else Game Informer managed to find out about the game.

Later this month Ubisoft was supposed to reveal three new operators for Rainbow Six: Siege, coming in Operation Blood Orchid. However, the internet already knows them.

So far we've only seen some intriguing art and screenshots from Iron Harvest, a diesel punk RTS combining the 1920s and mechs. Now the game's got its first trailer, which shows off some gameplay.

Middle-earth: Shadow of War microtransactions and the need of internet connection explained

Players didn't particularly like the news that Middle-earth: Shadow of War is going to include microtransactions and require Internet connection. Monolith Productions decided to explain that.

Age of Empires IV in development by Relic, Company of Heroes dev

It has been 12 years since the release of the last Age of Empires game. And now, finally, Microsoft has announced Age of Empires IV, in development by Relic Entertainment.

Are you a proud owner of a PC able to handle games in 4K? Forget that! Here's what 16K in video games looks like!