If players were asked about what's their first though when they hear the word "Crytek", the Far Cry series (or at least its first installment) and Crysis would certainly be the most popular opinions. The latter would probably also be mentioned in the context of the recent remaster, although not necessarily with enthusiasm. Probably hardly anyone would even mention German developer's other work, although ironically, it is doing very well. We're talking about Hunt: Showdown, which came out of early access in August 2019 and has become quite successful on Steam. In the last 30 days, up to 16,523 users have played it at the same time, which is the best result ever (via Steam Charts).

First time we heard of Hunt: Showdown was over 6 years ago, although under a different name. The current title appeared three years later, and the following year the game went to Steam's Early Access. There were no more than 10.3 thousand people in the game at the time of release, and it was rare for it, at least before the debut of version 1.0 in August 2019, to attract a comparable number of users. However, the latter event clearly increased the interest in the game, despite some rare periods of decline. October was particularly successful - Hunt: Showdown attracted the largest number of players in its history.

Of course, 16,000 players are not much compared to Steam's biggest hits. Playerunknown's Battlegrounds beat Crytek's game with ease, even though its best times are clearly long gone. Hunt: Showdown also lags far behind Among Us, Rust, or the recently debuting on Steam Apex Legends, not to mention Valve's "holy duality", i.e. Dota 2 and CS:GO. Today, Crytek's work is ranked on 93rd spot on Steam's list. 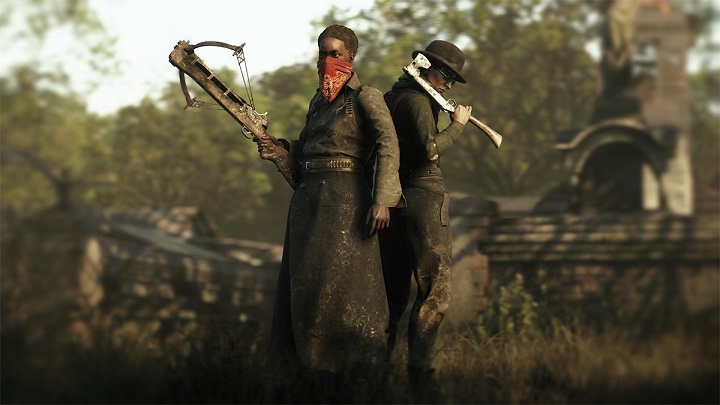 Crytek does not complain about the popularity of Hunt: Showdown.

However, for a title that rarely appears in the media (not to mention its de facto lack of a wider ad campaign) and seemingly overshadowed by powerful and - what's important - cheaper competition, this is a surprisingly good result. It's enough to compare it with the game that became quite famous before its launch, namely Marvel's Avengers. The superhero game didn't even catch up with the first hundred of the most popular games on Steam. The title attracted a lot more players on launch than Hunt: Showdown, but just next month the Avengers were left in the dust and so far there is no indication that it will start making up for the losses.

Another thing that Square Enix's game lacks are user reviews. Not only does Marvel's Avengers have fewer reviews (9.8 thousand compared to almost 54 thousand), but the buyers also gave the title mixed notes. Meanwhile, after a not entirely successful debut and (over a year of updating) Hunt Showdown can boast an average of 81% of positive ratings. Players praise the greater emphasis on survival elements and tactics than in typical battle royale games, as well as the refined and "interesting" audiovisuals. Of course, there are also complains, mainly about the typical pitfalls of online titles (read: servers, cheaters and toxic players), although there are also rare mentions of errors.