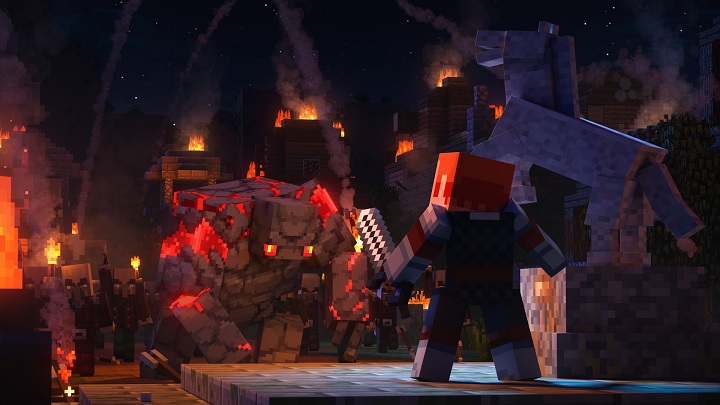 Minecraft's dungeons are waiting for the daredevils.
Minecraft Dungeons in a nutshell:

Today, as announced, a new Minecraft game has made its launch. It is Minecraft: Dungeons, a colorful hack'n'slash, in which we roam dungeons solo or in the company of friends. The title appeared on Xbox One, PlayStation 4, Nintendo Switch and PCs. In the case of Microsoft's platform, the game has been added to the Xbox Game Pass service library. If we don't want to purchase the subscription, we can find the digital edition of Minecraft Dungeons on Microsoft's, Sony's and Nintendo's stores, where we will pay $19.99 for the basic edition. The hero edition (adding skins and two DLC expansions) costs $29.99.

We heard about the new work of Mojang in late 2018. It is not the first experiment conducted by the devs with the franchise that was already played by hundreds of millions of people. Earlier, we received an episodic adventure game, and Minecraft Earth - a title to compete with the popular Pokemon GO - is not that far away. Minecraft: Dungeons itself proved to be a relatively good title. Critics appreciated the accessibility and overall design of the game and the great cooperation mode, but the simplifications also resulted in a lack of depth or greater challenges. Nevertheless, the rating of 7.5/10 given by our reviewer gives good testimony to the developers' work. Minecraft: Dungeons will receive a handful of DLCs with new content, which should extend the life of the game.