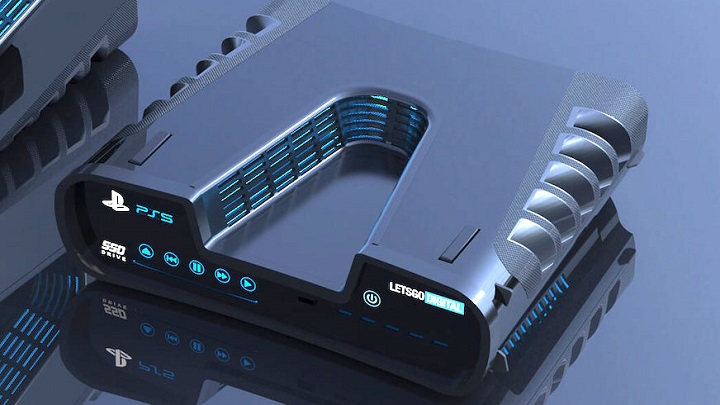 Another photo of PlayStation 5 devkit confirms its unusual appearance.

Another unofficial photo of the developer version of PlayStation 5 appeared on the web (wesaw the other one back in October), which most likely also shows the DualShock 5 controllers. The photo was uploaded to Twitter by user The Drunk Cat. As the user stated in one of the comments, they are not the author of the photo, picture belong to the developers who already have access to the console. The editor of The Verge, Tom Warren, confirmed that the photo actually shows a PS5 devkit (the appearance of which has been known for several weeks) and explained their unusual design.

The reason why the device has a "V-shape" on top is trivially simple. Developers have to carry out multiple tests under extreme conditions, and cooling has been optimised to push air out of the sides and centre. At this moment it is worth to remind that the consumer version of PS5 will differ from the already known appearance of the devkit. We are going to learn whether it is going to have a similar feature only next year.

What's more, many Internet users claim that the controllers visible on the photo are DualShock 5s, about which we could read a few weeks ago. However, the photo does not show them in their full glory and even in their enlarged version it is hard to say what we are dealing with here. On the front panel there is also a small digital screen informing about, for example, IP address, MAC or DNS (there is no info about the game running on the console, contrary to what some fake messages said, there is no info about it being a remake of Demon's Souls, as explained by the author of the said fake news).

As a curiosity, it is also worth to look at the devices on the back on the right side. These are devkits of PS4 and PS4 Pro.

PlayStation 5 will hit the store shelves in the run-up to Holidays in 2020. The device will have an AMD processor, offer hardware support for ray-tracing, and be equipped with an SSD. Learn more about Sony console in our comprehensive summary.