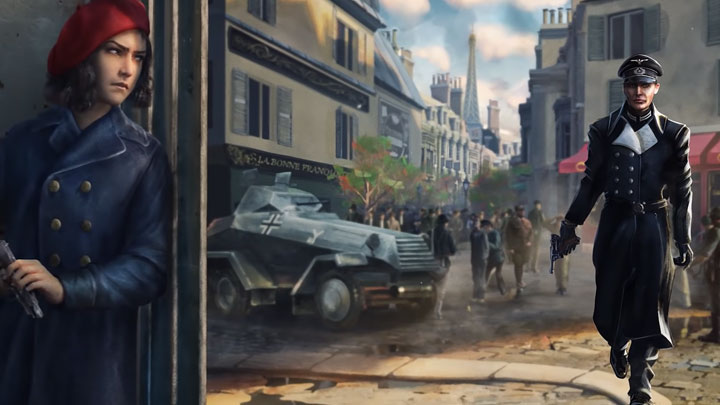 PDXCON 2019, this year's edition of Paradox Interactive Fans' Convention, is currently underway in Berlin. The most important news from this event was the announcement of Crusader Kings 3, but the event also revealed a number of expansions to older games, as well as the release of trailers for the upcoming games of the publisher.

We have compiled all the most important announcements and videos from PDXCON 2019 for you in one place.

Let's start with Surviving the Aftermath, the game announced last week. The game is continuation of the popular Surviving Mars. At the event, the first trailer of the project was shown, containing many gameplay fragments.

The game has just launched in early access on PC in Epic Games Store and on Xbox One as part of Xbox Game Preview. Next year's full release will also be available on Steam and PlayStation 4.

A trailer of Werewolf: The Apocalypse - Earthblood, an RPG action set in the so-called World of Darkness, was also shown in Berlin. The same setting is also use in games based on Vampire: The Masquerade license. Unfortunately, there were no gameplay fragments in trailer.

The game is coming to PC, Xbox One and PlayStation 4. The release is scheduled for next year.

During PDXCON 2019 we were virtually flooded with announcements of new expantions to popular games released by Paradox Interactive.

The excellent strategy game Age of Wonders: Planetfall will get the Revelations expansion. We will not have to wait long for it, as the launch is scheduled for November 19.

The DLC will offer, among other things, additional missions in the story campaign, a new scenario, new mechanics in location with dangerous anomalies and previously unavailable Heritor technology to suck out energy from enemy units and use it to activate special abilities.

Harebrained Schemes revealed that they are working on Heavy Metal DLC for the turn-based strategy game BattleTech. The expansion will introduce eight additional mechs, seven of which will be classic models known from the original table top game, and one will be a completely new type, specially developed for this expansion.

There will also be a mini campaign and eight new weapon systems. The DLC will launch on November 21, this year.

In turn Stellaris, the insterstellar strategy game, will receive add-on titledFederations , which will expand diplomatic options, introduce new constructions, and add the so-called Origins system, which will enable us to shape the history of civilisation before we take command of it.

For the time being, the devs are not ready to reveal the planned release date of Stellaris: Federations.

Paradox does not forget about the fans of Hearts of Iron IV. With them in mind, La Resistance expansion is being created. The add-on will introduce secret agents, spy missions and new options for resistance movements.

The DLC will also offer new objecive trees for France (both Free French and Vichy France) and Spain (for the Second Spanish Republic and Spain). We will also receive a more advanced version of the Spanish Civil War.

Unfortunately, also in the case of Hearts of Iron IV: La Resistance we didn't learn the planned release date.

The free DLC The Punic Wars Content Pack for Emperor: Rome has also been announced. It will offer additional historical missions, fresh music and two new unit models. Unfortunately, we don't know when we can expect the release.

Paradox also offers many attractions for Prison Architect fans. Psych Ward: Warden's Edition will launch on November 21. As the title suggests, it will enrich the game with insane criminals and related elements such as new rooms, medical staff and other related things.

In addition, a vague teaser has been released for another add-on, which will be released next year.