A three-dimensional fight in which we participate in a big tournament, competing for the title of the most powerful warrior in the galaxy. Eight participants from different places in the universe stand in front of each other, and each has its own unique set of blows. 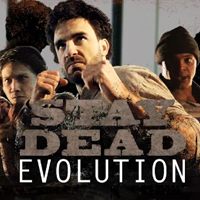 An exceptional action game that combines elements of classic fighting and rhythm games. As the title suggests, this is an enhanced version of the game originally released in 2012. Both installments have been developed by the Italian studio Brucefilm that has previously worked on music videos and commercials. Stay Dead Evolution stands out from other fighting games mainly because of the fact that the sequences one gets to see on their screen have been shot with real actors. 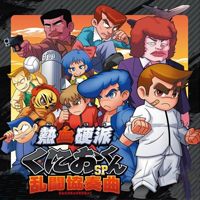 Two-dimensional scrolled fight belonging to the famous Kunio-kun series, which has accompanied players since 1986. We play the role of a boy named Kunio, who, together with his friends, intends to stop gangsters spreading through the streets of Tokyo.

A three-dimensional fight in which two-person teams of pilots, sitting at the helm of big robots, appearing in series and films from the Gundama universe, stand in front of each other. The production is a direct conversion of one of the most popular titles in Japanese game rooms, which has been improved and enriched with new game modes.

Double Dragon II: Wander of the Dragons is a refreshed version of the Double Dragon II: The Revenge, still popular in the 1980s. The games can also be played in multiplayer mode via the network, in a maximum of four people.

Ready 2 Rumble is a representative of one of the most twisted boxing series, offering players the opportunity to fight caricatured and extremely spectacular fist fist fights.

Tournament of Legends is a three-dimensional fight produced by High Voltage Software studio, in which mythological characters fight in several arenas. In single player mode, the creators have introduced plot threads for each of the playable heroes. There is also a possibility of clashes with a living opponent.

Young Thor is an arcade brawl based on Nordic mythology, prepared with the capabilities of PlayStation Portable in mind. Frima studio is responsible for the production of the title published as part of the PSPMinis service. Players are guided by the actions of young Thor, who has to oppose the demonic goddess Hel and the hordes of her servants.

A tactical beat played in turn-based system, using the popular rag-doll technology. In the game, we direct three-dimensional models of characters, performing subsequent movements by bending, straightening, stretching or relaxing their muscles and joints. This allows complete freedom of movement. The production is characterized by an exceptionally ascetic setting, limited to rivals fighting against a white background and simple but suggestive sounds of blows inflicted.

A sequel to the 3D fighting game by Tomy, telling the story of the popular Japanese comic book and animated TV series character. The plot of Naruto: Clash of Ninja 2 is divided into 30 chapters based on the events from the TV series, and allows you to play not only as Naruto himself but also as other characters, 10 of which are available from the start, while the other 13 you need to unlock.

Inuyasha: Feudal Combat is a combat game, created on the canvas of Japanese anime, which since 2003 has been gaining a lot of new fans. Unlike other products of this type, in this, in addition to the standard modes, such as Story, Versus or Training, a unique mission mode has also been implemented.

In the game we play the role of a street warrior and fight a series of increasingly difficult fights. It is also possible to fight with other players.

Samurai Shodown V is a sequel to the popular fighting series, which began in 1993. Three gameplay modes are available: feature mode, versus mode (fight against a living opponent) and practice (training).

Two-dimensional fight created by Capcom. The distinguishing feature of this heading from dozens of other similar games is the fact that it contains a large number of characters from several other brawls of the above mentioned producer.

Jaxe is a brawl created by the German developer studio Fluid Games, which was previously created in the world thanks to the middle class game The Rage. It allows for single-player games, where the opponents are controlled by the A.I. computer and for group battles of up to sixteen people.

SVC Chaos: SNK vs. Capcom is nothing more than a good 2D brawl, which is an excellent alternative to three-dimensional murder and has a wonderful climate from the past. The game is a so called crossover, in which the authors gave us the opportunity to control the characters from the games of both companies.

Metal Combat is an arcade fight produced by the Solar Studios development team. The action of the game was set on a radioactive dump, where mutants, zombies, skeletons and robots fight. The creators used their own engine SubaZ, characterized by high complexity of the physics model.

The next installment of the famous series of three-dimensional battles, this time on the Gamecube console. We play the role of one of several warriors. It is worth mentioning that it is possible to transform into exceptionally strong creatures.

Another installment of the popular three-dimensional fighting game series by Tomy, based on the popular manga and anime by Masashi Kishimoto. The plot of Naruto: Clash of Ninja Revolution 2 consists of over 20 missions, some of which are modeled after the events of the TV series, while others were designed for the purposes of the title. Soon after the disappearance of Narutos best friend, Sasuke, it turns out that the youngster joined forces with Orochimaru, the chief of a hostile village.