Three more weeks until Death Stranding: Director's Cut, announced during the Summer Game Fest 2021, will see the light of day. During Gamescom Opening Night Live 2021 we learned about the new features, weapons and gadgets that will come to the game, and next week we will get the final trailer for the game. The material is supervised by Hideo Kojima himself, who asked fans on Twitter to patiently wait a few more days. 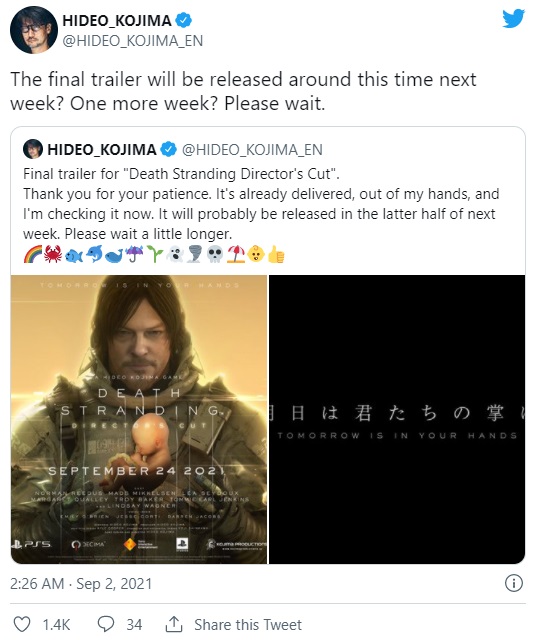 The content of the popular Japanese creator's post is a bit surprising, as he believes that in the flood of launches of big new games - such as Deathloop, Far Cry 6 or Battlefield 2042 - the release of the director's cut of Death Stranding will pass without much publicity, so the final trailer will be published "quietly". However, it seems that Hideo Kojima is somewhat in denial of facts. Firstly, the rather lengthy footage from Director's Cut culminated the aforementioned Gamescom Opening Night Live 2021 - it may not have been a closing like the presentation of the long-awaited Elden Ring trailer (like at the show preceding E3), but Death Stranding came out rather well. Secondly, the Japanese director admitted that he put "all his soul" into the trailer. Would he do that if he didn't believe in the project? 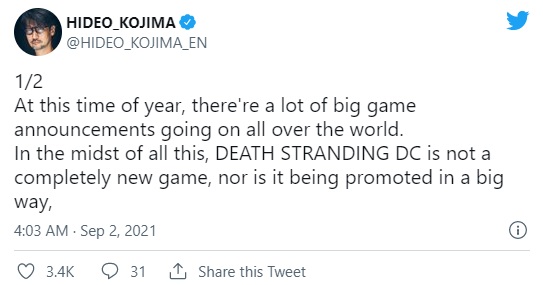 Anyway, the Director's Cut edition will be released on September 24, exclusively for PlayStation 5. And then what? Actor Norman Reedus recently suggested that a sequel may already be in production. It's possible, however, that Hideo Kojima has a spin-off in mind, as here's what Kojima wrote on Twitter today:

It's hard to say if Hideo Kojima is serious. It's well known that Kojima likes to troll the gaming community, as he recently revealed that he's been reading a book titled The Murder Case of Abandoned Amusement Park, thus fueling the rumors about his participation in the mysterious project known as Abandoned. Therefore, it can be assumed that the modesty with which Mr. Kojima speaks about Death Stranding: Director's Cut is also a kind of smokescreen and the new edition of the game will significantly improve sales of the standard version, which by the end of July 2021 had sold more than five million copies on PC and PS4.