Just a week ago we informed about Dying Light 2 as the most frequently added game to wishlists on Steam, and now we have to report that Techland's game lost its position as leader in this category. The throne was taken by Elden Ring, the upcoming soulslike from the fathers of this subgenre - FromSoftware. Both titles will debut in February - the first on the 4th, and the second on the 25th of the month. 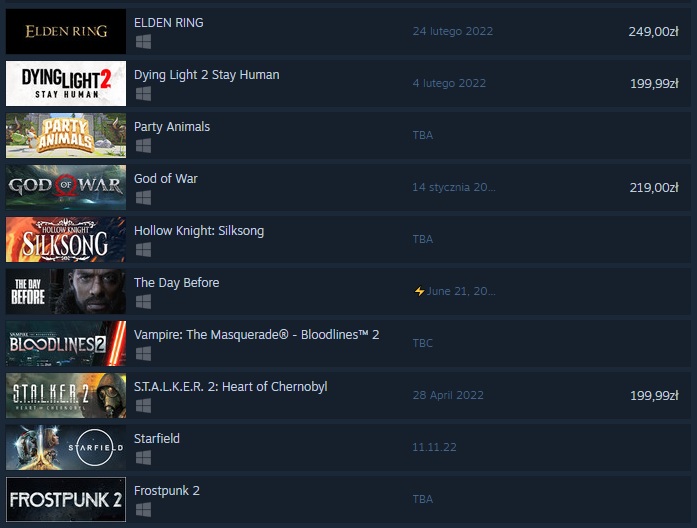 As you can see on the screenshot above, the next positions on the list are occupied by Party Animals, the PC port of God of War and Hollow Knight: Silksong. It seems significant that only one of these productions has a release date. It's the same with other games - we know the release dates for The Day Before, S.T.A.L.K.E.R. 2 and Starfield, but we don't know when Vampire: The Masquerade - Bloodlines 2 and Frostpunk 2 will be released. This leads us to conclude that the games we want the most are those that come out soon or are outside the release schedule.

And if you're waiting impatiently for the aforementioned Elden Ring, I have good news for you. A short video showing the game's character editor has been leaked online. It's not the final version, so you can expect it to miss subtitles or an icon or two, but the video gives a glimpse at what kind of characters we'll be able to create. You can watch it below.

Ready or Not Undefeated in Steam's Top 10 Bestsellers