We've learned about Grand Theft Auto: The Trilogy - The Definitive Edition, due to launch the day after tomorrow, from online leaks. Is it any wonder, then, that two days before the game's release, information about a remaster of the next installment, namely GTA IV, appeared online? Although actually I should write: eight days before. News of the refreshed version of fourth installment - and the first Red Dead Redemption - surfaced last Wednesday on 4chan... which is not a very reliable source. But today similar reports came from Twitter user RalphsValve - the same one who recently revealed information about the supposedly upcoming Call of Duty: Modern Warfare 2. 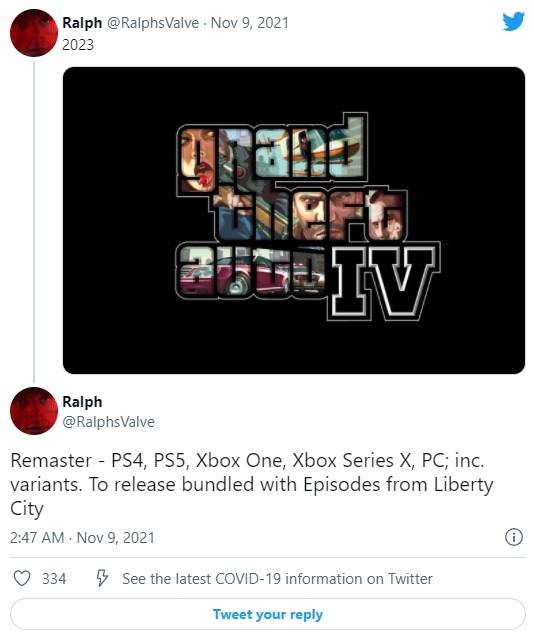 There's no need to believe the Twitter user just like that and it's worth taking his speculations with a grain of salt. Nevertheless, they are worth a look. Refreshed version of GTA IV would be released in 2023 on PC, PS4, PS5, XOne and XSX|S and would include the "core" protagonist, Nico Bellic, as well as the following expansion pack titled Episodes from Liberty City, in which we played as other characters. The release wouldn't include multiplayer mode, which was present in the fourth installment, but that wouldn't surprise anyone - Rockstar has its own GTA Online and won't compete with itself.

Unless, the company decides to hit two birds with one stone - as Liberty City was once rumored to become a part of that multiplayer game (at the time still an add-on to GTA V). What's more, despite the fact that most rumors claim GTA 6 will take us to Miami-based Vice City, some sources suggested we could at least do a few missions in the virtual equivalent of New York. This gives us a total of not two, but three birds.

Rockstar is not a company associated with remasters, but if these rumors are confirmed, that may soon change. Probably not soon, because the official announcement of Grand Theft Auto: The Trilogy - The Definitive Edition appeared only a month before the release date. The question is how to evaluate such a scenario - on the one hand, it gives more hope for a remake or remasters of the first Red Dead Redemption but on the other hand it may mean that the work on GTA 6 is going really slow and we'll have to wait for this title much longer than we expected.

Bethesda has an Idea for Fallout 5, but We Won't See the Game Anytime Soon

Apple-1 Expected to be Auctioned Off For $600 Thousand