Back to the Future III

Back to the Future III is an arcade game, which plot refers to the third episode of the popular adventure film series, directed by Robert Zemeckis. This time Marty McFly will move in time until 1885, where he will try to prevent the murder of his friend Dr. Brown.

Another, third title from an excellent series of pinball simulators. This time we have at our disposal a table in a typical American style, and the plot of the game focuses on the theme of a taxi ride through the United States.

Departure Agents: Departure Party is an arcade game for children based on the canvas of the popular animated series "Totally Spies. The title was produced by OUAT Entertainment, a company employed by French company Ubisoft to create the work. 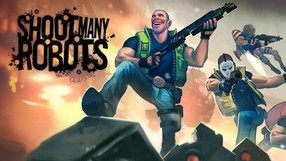 Shoot Many Robots is an old style side-scroll 2D arcade game by Demiurge studio in Boston. Players direct the actions of people who stand up to fight rebellious robots. The aim of the game is to exterminate as many enemies as possible using a variety of weapons - from pistols to chainsaws. In the cooperation mode, four people can participate in the struggle with robots.

Batman: The Movie is an arcade game, which, as you can easily guess, is based on the plot of the film under the same title. The player playing the role of the Dark Knight will have to curb the criminal drive of Joker and save the city of Gotham from extinction.

A very pleasant platform game created with the use of nice two-dimensional drawing graphics, designed for the youngest players.

Boulder Dash: Treasure Pleasure is another part of the legendary dexterity and logic series, launched in 1984 under the banner of First Star Software and dedicated to several home microcomputers.

A set of fun arcade and logic games for the youngest players, whose main character is a piece of Swiss cheese SpongeBon together with friends.

A modern adaptation of the arcade hit from gaming salons, in which Marchall Gram sets out to rescue the kidnapped princess Kyi-La. Traveling through time we will face space knights, ninja warriors, cavemen, robots, cowboys and other opponents from different epochs.

Where is Nemo: Underwater playground is the second game, openly referring to the hit animated film entitled "The Bubble". Finding Nemo (Where Nemo is) and dedicated not only to children but also to whole families. The user therefore visits the sea depths again to experience fantastic events in a series of colourful creatures and to enlarge the horizons.

Sea Wolves (Polish: Wilk Morski) is a simple arcade game. As the title suggests, we are in charge of a sea-going ship here, while virtual struggles have been set in a world affected by cataclysms, as a result of which most of the dry land has disappeared under the surface of the water.

Luxor 2 is an extremely fast puzzle-arcade game, whose plot was located in ancient Egypt. It is part of a cycle initially intended for owners of personal computers.

Road Runner is a simple arcade game by Mindscape, whose story is based entirely on the popular series of cartoons with Strus Pêdziwiatrem (Road Runner) and Kojotem (Wille E. Coyote) in the leading roles. The latter would like to eat the bird for breakfast - the only problem is that he would have to catch it first....

Tetris Worlds is a variation created by developers from Blue Planet Software studio on one of the most popular logical games in the history of the industry. Compared to the classic Tetris, the title introduces a few innovative ideas in gameplay and fabulously colourful visual setting. Players can test their skills in 6 variants of solo fun and competing in 4-player multiplayer mode.

An arcade game set in the realities of World War II, namely the American-Japanese war in the Pacific. Players control one of the combat planes, which then clashed in the skies and in fifteen combat missions must tilt the victory room to the side of their country.

Fastlane Pinball is a budget program simulating pinball. The creators from the Dutch company Framework Studios focused primarily on online gameplay and competition between players.

The latest installment of the classic series of Namco arcade tiles. This time the main role is played by Mrs. Pac-Man, and the maps are three-dimensional. More than 50 different levels and additional mini-games await you. Multiplayer is also available in two different modes.

GoJoe Pogo is a simple arcade game, addressed primarily to the youngest computer users. The simple story is as follows: The circus comes to the town where the title character lives. Joe really wants to see the show, but because of scraping something, his mother doesn't allow him to do it.